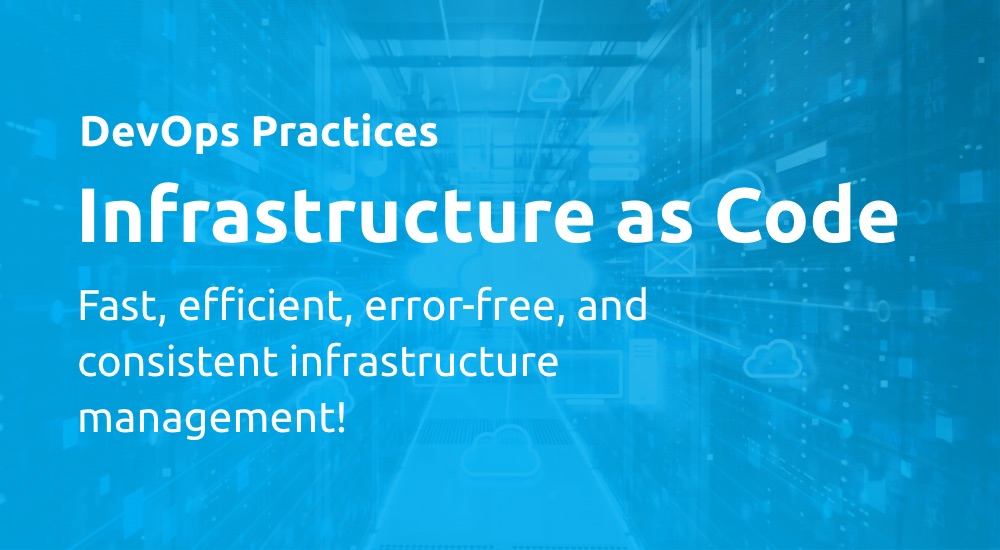 Infrastructure as Code is one of the most important concepts in DevOps practice. It helps in the management of infrastructure, such as networks, virtual machines, load balancers, and connection topology. The management is done using a descriptive model, using the same versioning tools as the DevOps team use for source code.

IaC solves the problem of "environment drift." Over time, each environment becomes unique, and it cannot be reproduced automatically. These inconsistencies between environments can result in issues at deployment, security vulnerabilities, and risks when developing applications and services that need to meet strict regulatory compliance standards. Administration and maintenance of infrastructure involve manual processes that contribute to errors and are hard to track.

IaC solves these problems with the principle of "idempotence." Idempotence is the property of particular mathematics and computer science operations whereby they can be applied multiple times without changing the result beyond the initial application.

The configuration of the model is typically done in code formats such as JSON or YAML. The release pipeline executes the model and creates a target environment; all changes to the environments are made by editing the source model and by starting the release pipeline - not directly on the target environment. On the first hand, this practice could look a bit more complicated, but in the end, it eliminates configuration drift and makes all your environments consistent. With this approach, it is also easier to maintain and track infrastructure versions and confidently roll back to any previous version.

What is the Difference Between Mutable and Immutable Infrastructure

Mutable infrastructure can be modified after it is provisioned initially. This gives your team the possibility to make ad hoc server configurations to meet particular urgent needs. The problem with this approach is the "environment drift" that can happen over time.

What Are the Benefits of Infrastructure as Code?

IaC helps dramatically speed up provisioning and scaling of infrastructure for development, testing, and production.

IaC helps eliminate "configuration drift" that occurs when making ad-hoc changes to the environments. All your environments can be kept consistent all the time.

Together with other benefits, IaC also helps organizations to take advantage of the consumption cost model in cloud computing.

AWS CloudFormation is a tool created for the management of AWS resources through modeling. It helps provision and updates AWS resources in an orderly and predictable fashion by using automated procedures described as models in the CloudFormation template language, YAML or JSON.

AWS OpsWorks is a configuration management service that uses Chef. Chef is an automation platform that treats server configurations as code.

One of the most important properties of Infrasture as Code is the infrastructure immutability that helps prevent "environment drift" across various environments such as development, testing, staging, and production. Infrastructure and application resources are modeled with either a text file or programming language. There are no changes to the existing infrastructure; instead, when there is a need for infrastructure change, we change the model and start an automated provision procedure from the beginning.

Sedmi odjel is an AWS Advanced Consulting Partner and Solution Provider; we are specialized for the implementation of AWS services and solutions.

As a company that works with a lot of software companies, we understand the whole development lifecycle and how DevOps model and tools can help your company become more competitive.

If you have any question about DevOps tools:

Why Your Company Needs a Disaster Recovery Plan?

DevOps and Data Science: How Can They Work Together

How Do We Ensure the Highest Quality of Our Services?

Automated DevOps: Everything You Need To Know