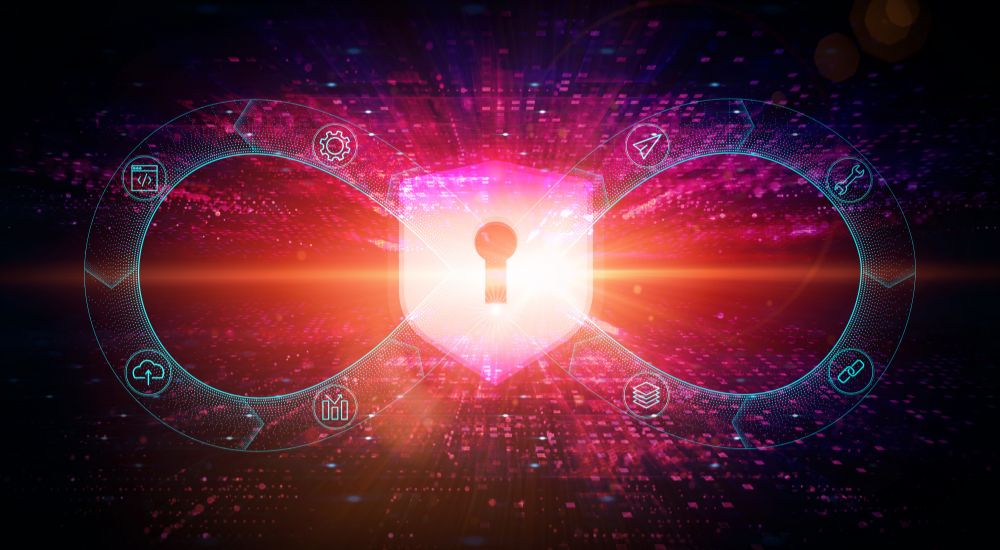 In the past software updates weren’t frequent as today. Now many developer companies implement DevOps practices which lower the development cycles. Thus they are capable of making more releases. However, this inadvertently affects the way companies deal with security threats.

Before security was only a concern in the late stages of development, practices were usually implemented by a dedicated team. Nowadays, there are more threats than ever and the short release cycles complicate achieving security goals. Breaches can have serious consequences for companies: from data to financial loss. That’s why security should have a crucial role in development, from start to finish. This is where DevSecOps comes into play.

DevSecOps is short for development, security, and operations. It integrates security into the continual development and operation process. The goal of DevSecOps is to address security challenges and thus should play an important role in the entire app lifecycle (during every possible stage). DevSecOps can use the same framework as DevOps and make sure the apps are as secure as possible in a reasonable amount of time. The issues get addressed as they show up.

There are many advantages of integrating DevSecOps into the development cycle:

However, such DevSecOps integration doesn’t come without challenges. And some organizations are hesitant to make the necessary DevSecOps leap because of that.

There is still some prejudice that security methods are contrary to traditional DevOps principles of speed and agility. Traditional application security testing is process-heavy and manual, taking a lot of time. Developers can thus oppose the implementation of DevSecOps thinking it would only slow them down.

It’s not smart to try to enforce a DevSecOps approach if some members of the team oppose it. The key stakeholders should be committed to it. For the best possible results, everyone should be on the same page. You should have an implemented toolchain that will help things go smoothly and easily integrate security in the DevOps process.

There are many different methods and strategies you can integrate. It’s important to be flexible and know which ones suit your organization best. Security should be applied to each phase of the pipeline. There is no one-size-fits-all solution, but here are some overall suggestions you could use. Also, you could always look to the DevOps communities and try to see how they solve their problems.

Security teams should be included in the process as early as possible. During the planning phase, some requirements can already be addressed, and threat-and-risk model assessment tools can be implemented. Furthermore, the security team can do an analysis and then provide appropriate training. To goal here is to develop a safety net that will recognize issues as early as possible to save you time and money.

The greatest shifts can occur during these phases. Now that the whole team shares responsibilities, it is time to do further steps. It is very important to plug security tools into the CI/CD pipeline and workflow to automate security tests, scans, monitoring, and analysis. Everything should be automated as much as possible. All improvements and changes should follow the overall development pace to not slow down the whole project.

Developers should use their new security knowledge to implement the best coding practices in their work. The code itself should be resilient. If the developers rely on third-party code all of it should be reviewed. Code that’s coming from unknown sources is potentially a serious security threat.

Hopefully, the main security threats have been addressed and solved prior to this phase. However, there is still more work to be done. More analysis should be done if there is any difference between the development environment and the final deployed products. Security should once again be verified. The security team can try and simulate real-life events and penetration testing to see if there are any vulnerabilities.

If the finished application accesses the internet, connects with third-party software, or handles sensitive data - additional measures should be implemented.

Today security is more important than ever. Thus DevSecOps (development, security, and operations) should play an important part in the CI/CD pipeline. There are many benefits to including security in the traditional DevOps process - including better collaboration and productivity.

For the best results, security should be implemented in all phases - from planning to deployment. Tests and verifications should be automated and solved as they come to not hinder the development process.

Automation in the AWS Cloud

How to Increase Your Organization's Security Level with AWS Cloud?

How it Works: Cloud Governance Framework for AWS